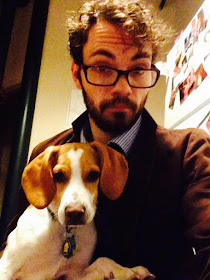 Who is in the photo at right?

This is Simon. Our beagle mix. Or at least we think. On his last visit to the vet he weighed 20lbs....but he definitely has hound in there. I'm pretty sure he just thinks of the vet as a cool place to hang out and meet new animals. He is right around six months old.

My name is Ethan Bethune. I am a 26 year old writer of poetry, essays and short fiction. I live in Alabama.

What's the occasion for Coffee with a Canine?

We have coffee every morning. Sometimes I carry it with me on our walk.

Southern Girl Coffee. Colombian blend. Although it really is time for the holiday stuff...like spiced this and peppermint that.

Any treats for you or Simon on this occasion?

Absolutely. Chocolate Cake for me, personally. And Simon is...well he's ignoring his milk bones and digging up earth worms.

How were you and Simon united?

Simon is a rescue dog. We found him with A New Leash On Life in Huntsville. He was left in a ditch when he was just a few weeks old. But he has been just fantastic.

How did your dog get his name? Any aliases?

I remember they were calling him Silas... And my wife looked at me and said "he's not a Silas...look at those ears....he's a Simon."

So I guess that's how we got the name. He looked at us like "thank you." It just worked.

Does Simon do more to help or hinder your writing?

Oh, he helps tremendously. I was really nervous at first. I've always thought of having a cat. You know, because on TV writers have cats and stuff. But he gets me outside which is good for getting vitamin D and other things and he stays up with me. It's pretty great.

Has Simon inspired the creation of any fictional dogs?

Hmmm. I don't think so...maybe some werewolf creatures, definitely non fictional though. I started Beagle in the City. Which is weekly posts about life from his perspective, narrated by him. And it's been a big hit.

It's weird. He loves the postman. Because he brings us all this cool stuff. We shop a lot online. But he goes crazy for squirrels and cats. He really tries to approach them and figure out what they're about. 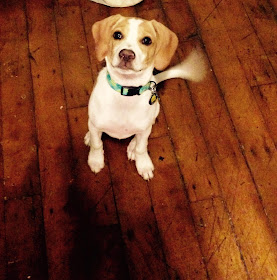 He collects things. Sticks, bark, big leaves and he loves squeaky toys. We got him a big Coon one and a Giraffe. He carries them around the house just making them squeak. I haven't seen him ignore anything really. He is just so enthusiastic...he was playing with a grub worm the other day.

Who is Simon's best pet-pal?

Probably our building's house cat. They have a strange relationship. Just following each other around...she watches him chase things.

What is Simon's best quality?

He's lazy...like an old hound dog. If we want to just lay around all day after walking him...he is totally fine with that... He even watches Buffy and old movies with us.

If Simon could change one thing about the good people of Alabama, what would it be?

Hehe...I'm fairly certain he would make everyone flash dance in the street and give him treats.

If Simon could answer only one question in English, what would you ask him?

If Hollywood made a movie about your life in which Simon could speak, who should voice him?

What advice would Simon give if asked?